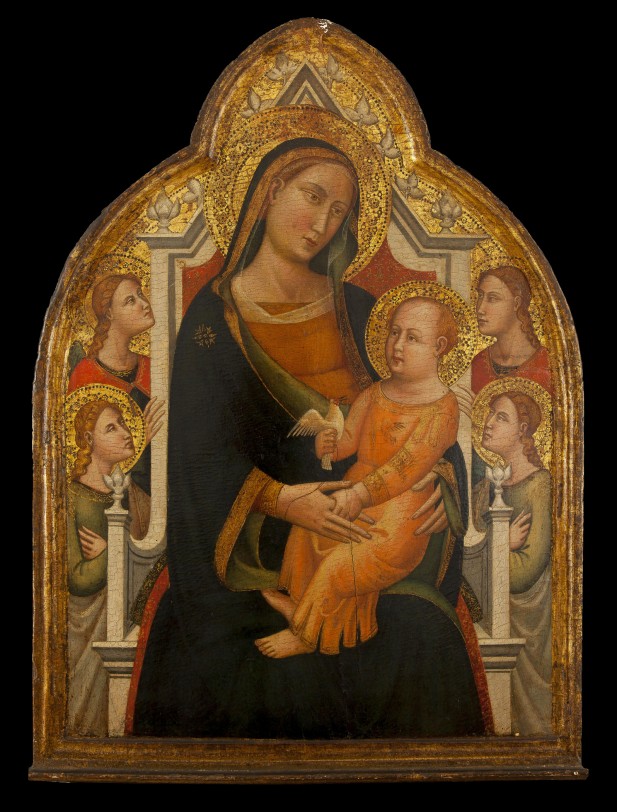 The Virgin, lounging on a marble throne with floral decorations, is gently supporting the Child on her lap. While tenderly holding the mother’s forefinger in a hand, in the other he is keeping a goldfinch, about to open its wings. On the sides of the throne, the profiles of four angels stand out; their unflinching and wise gazes seem to trace vectors of attention, to the observer’s benefit, towards the faces of the Virgin and Jesus. The painting, enhanced by a perfect preservation status of the support (a rather rare quality, considering it is a mid-fourteenth century painting), by now is a quite well-known work, at least to the scholars of the Florentine fourteenth century. It is the central section of an important polyptych, formerly in the collection of the canon and scholar Angelo Maria Bandini (1726 – 1803), dispersed during the nineteenth century. As widely known, Angelo Bandini’s collection was gathered in the oratory of the Church of Sant’Ansano in Fiesole. And today the other paintings of the polyptych featuring the Saints John the Apostle, Bartholomew, Margaret and Catherine of Alexandria are conserved in the museum dedicated to the distinguished religious of the town on the hills of Florence. In 1963 Federico Zeri made a first connection of our Virgin with the Child with the other sections (oral communication to Klara Steinweg), when the painting was already in the Bagnarelli collection in Milan. Zeri’s attribution followed Offner’s previously expressed opinion (1934): concerning the minor sections, he pronounced in favour of a reference to a not so close follower of Bernardo Daddi. It is only with the definition of the catalogue of the so-called San Polo in Chianti master – named after his most known work, a Madonna with the Child among Saints Peter, Paul, Mathew and John the Baptist, angels and two donors situated on the right altar of the church of San Polo in the homonymous village near Greve in Chianti – that Angelo Tartuferi (1989) was able to assign the polyptych to this pivotal figure, important in the diffusion of the shapes of the Giottesque tradition in the Chianti region in the phase before and immediately after the 1348 Pestilence. The Master bases his works on the direct experience of the pupils of Giotto, first of all Taddeo Gaddi and Bernardo Daddi, clearly studied on their frequent paintings of wood, but also on the bold perspective solutions visible in the Baroncelli and Pulci chapels in Santa Croce in Florence. Later, from the end of the 1350s – when we may set our painting – the master’s main reference becomes Puccio di Simone, whose polyptych in San Pietro in Petrognano, today in the Museum of Sacred Art of Certaldo, can certainly be compared with our painting. The expressive temperament superintending the formal aspects brings him close to Puccio, although the anonymous painter features a lower tone quality than Bernardo Daddi’s main pupil; it is almost as if the two artists – the slightly later Master of Barberino can also be connected with them – consciously anticipated the development towards a more approachable and colloquial rhetoric, an evolution which, however, became an ascertain fact in Florence after the Pestilence. Our painting doesn’t give in to the popular simpering: the figures maintain their solemn and quiet dignity and the perspective vigour is still the one of the beginning of the fourteenth century. Nonetheless, our impression is attracted to Jesus’ caring gesture towards the mother or the movement of the wing of the goldfinch, symbol of the passion, but not less vivid for being a symbol. Hence our attention is captured by the sentimental vibration and the impression not of an eternal and motionless monument, as for Giotto’s Madonnas, but rather of a delicate and fleeting snapshot.